Berriedale & Dunbeath Community Council received funding from the Heritage Lottery Fund (HLF), SSE Beatrice Fund, Highland LEADER Programme, and Historic Environment Scotland, for an exciting project focusing on Dunbeath Broch in the Strath of Dunbeath Water. The project has secured the broch’s future as an attractive, accessible and well-presented heritage asset for Caithness. The project began in May 2018, with work at the broch taking place in August 2018.

This exciting initiative has seen a programme of excavation and conservation work at the broch, with opportunities for involvement throughout, and training and skills development for participants.

Local primary school pupils learned about the Iron Age through archaeology workshops. Other events included evening lectures and an open day at the broch complete with an Iron Age reenactor/living history experience.

There was also an opportunity for participants to learn about drystone dyking techniques, with a new drystone seat constructed at Dunbeath Heritage Centre.

The broch at Dunbeath is one of the more accessible and – in terms of the visible, surviving stonework – best preserved examples in the county of this iconic Iron Age monument type.

It is a key point of interest on the Dunbeath Strath Heritage Trail, and the most visited of several brochs in the Strath, but it required conservation works to slow or prevent deterioration of the structure and ensure safe access.

Many thanks to the funders who helped make this work possible, and to the landowners, S.W.M Threipland, and Benny and Winifred Sutherland for supporting the project.

History of the Broch

The broch first came to antiquarian attention in 1866, when WST Sinclair of Dunbeath emptied the interior of rubble. This was one of the earliest antiquarian investigations of any Broch in Caithness, but the works were extensive, clearing the interior and the external wall faces of the broch of rubble, revealing the entrance, a guard cell and a small intra-mural gallery in the north-west. Relatively few artefacts were recovered during the excavations: a large quantity of animal bone, a possible human vertebra, some coarse stone implements and a small iron spearhead.

At some point following the 1866 excavations, limited rebuilding was carried out, including reinstatement of the intra-mural cell in the western side of the monument. It appears that this work was relatively crudely done, and the resulting stonework was considered unsafe and dangerous to visitors. A drystone dyke was erected around the broch to form a small enclosure; this was presumably carried out shortly after excavation and is shown on the first edition Ordnance Survey map of 1877.

No further work was carried out until over a century later, when in 1990 archaeologists from the University of Glasgow supervised a programme of consolidation and repair.

Vegetation was cleared and trees removed, and loose rubble and debris was cleared from the entrance and the interior. The corbelled roof of the intra-mural cell, which had apparently been completed during the 19th century rebuilding, was stripped down and rebuilt to make the structure safer for visitors.

At this time large sections of the inner wall face were repaired with new stonework, the scarcement ledge was repaired and sections of the upper wallhead rebuilt. This work was competently executed, but detailed records of which areas were rebuilt, and to what extent, are missing from the site archive and discerning original from modern stonework is difficult. 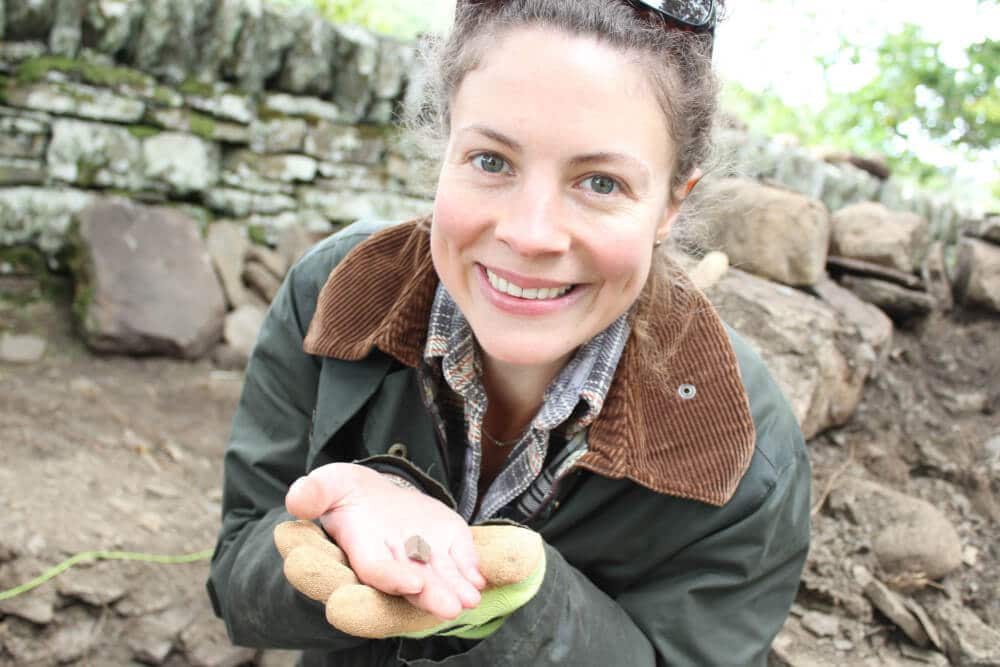 Careful analysis of the structure itself and the survey data has revealed that the broch has a long history of rebuilding and remodelling.

While the original broch was probably built in the early or middle Iron Age, the tower suffered a catastrophic collapse in antiquity (perhaps during the later Iron Age), necessitating the near-complete rebuilding of the southern half of the monument; also, the intra-mural cell is unlikely to have been an original feature and was probably added in the first century BC/AD.

In 2016, AOC Archaeology Group undertook 3D topographic survey in conjunction with the structural assessment and appraisal. A Faro Focus 3D laser scanner was used to collect a high-resolution pointcloud dataset encompassing all of the exterior areas of the broch, as well as the interior of the intra-mural cell.

A detailed photographic record was compiled, and a photogrammetric model created from over 400 photographs. The resulting archive provides a highly accurate and detailed archive of the condition of the monument at the time of the survey.

“I have had a brilliant time. The highlight being discovering something amazing while digging. I feel very lucky to have had the chance to be involved.”